So the San Diego Bassmasters had a club tournament last weekend. This month’s tournament was held at Lake Alamo in AZ. It’s a lake in the middle of now where with the closest town being about 30 miles away. It was my first time at the lake, and due to my work schedule I was only going to be getting one day of pre-fishing done. The thing about this lake, it’s a slot limit lake. You’re only allowed to keep one fish that is in the 13” to 16” slot. Everyone caught a lot of fish in that range.

I’ve never fished a slot lake before, so it was a bit to get used to. Hoping the fish on the end of the line was a shorty was an odd feeling. But our pre-fish day went without much of a hitch. We found some good spots, eliminated a lot of tackle, and found some other spots we knew people would fish. We found a great color that was working well for my boater, and a slightly different color that was working decent for me. I will say I went through A LOT of weights and hooks.

First day of the tournament, my partner catches about a dozen slot fish in the first hour. My watermelon red flat brush hog was only slightly off color from what he was throwing but it was a world of difference. After 90 minutes he had caught about 20 fish with one keeper in the boat, while I had two shorts in the boat. Then came the fish of the day for me. I casted out to this small patch of stick ups, and pulled in this little piggy: 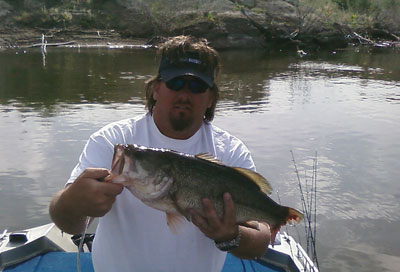 She tipped the scales at 5.14lbs. and ended up being big fish for the day. After the first day my partner and I were both in the top ten, both with full 5 fish limits. We did have to scramble for more plastics for Day 2, but we managed to find what we needed. We had been first out the first day, so this day we were last. We started running to our spot, then the motor basically cut out and got us JUST to our first spot (the same first spot from the day before). As we puttered into our spot, I saw a small stick up. I threw the watermelon flat brush hog and wouldn’t you know it, second cast of the day:

This piggy ran 5.65lbs, and ended up big fish for the tournament (my 5.14lber was second over all). With the blown motor we figured how long we had in our first spot, then spent the entire rest of the day passing great looking water to troll about 5 miles back to the launch ramp. We’re lucky we did too; we got back to the ramp with only 30 minutes to spare. I ended up 7th overall and won big fish money. It was a good trip!